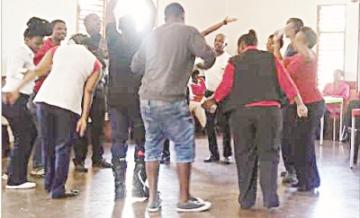 Mankayane Government Hospital staff members in song while they were waiting for management to address their issues yesterday. (Courtesy pic)

MANZINI – While the country has put up stringent measures to fight the spread of the coronavirus on one hand, the health system is collapsing on the other hand.

As it is, about four hospitals are not giving assistance to patients who come with various illnesses.
These are Mankayane, Mkhuzeni, Raleigh Fitkin Memorial and Mbabane Government Hospital.

Infact, patients at Mankayane Government Hospital voluntarily turned back as they feared contracting coronavirus (COVID-19).
This was after the patients found themselves in long queues in the hospital as the medical practitioners (nurses and doctors) and support staff downed their tools yesterday.

Their main demand was that the administration should supply them with personal protective equipment (PPE) before they could resume their duties. This meant that patients were not attended to at the hospital yesterday.

On top of that, the nursing staff also demanded that the administration should ensure that there were scanners at the main gate so that patients could be scanned to determine the level of their temperatures.

Their argument was that scanning patients at the gate would help in identifying people who needed to be questioned and isolated in preparation for testing.
“If a patient’s temperature is high, that individual will be treated as a suspect and will be questioned about places he/she had been to and people he/she had been in contact with before being taken for testing,” the insiders said.

Furthermore, another demand which they tabled to the hospital’s administration was that it should give them a designated area, which would be used as a holding area for the suspected coronavirus patients.

The insiders said another concern which sparked the downing of tools was the fact that the hospital was flooded with patients from all the four regions of the country as there were some challenges at other health facilities like the Mbabane Government Hospital and Raleigh Fitkin Memorial (RFM) Hospital, among others. They said the concern was that the patients were flooding the hospital yet as medical practitioners they did not have the protective gear.
“This means that our vulnerability is increased as we might attract more cases than we can handle,” the insiders said.

According to the insiders, when the nurses’ committee members came back from their meeting with the administration, they reported that a challenge they found was that the administration was allegedly working in isolation, yet they were supposed to be a team.

“As people who are on the ground, the administration was supposed to engage us after the virus was declared a pandemic. By so doing, they would know how they could assist us in order to be able to do our jobs properly,” the insiders said.

Regarding the demands, the sources said the nurses’ committee members told them that the administration said it was yet to engage the Ministry of Health with regard to their demands and that it had to do so in writing. They said it mentioned that since the E100 million supplementary budget had been approved, the ministry could make everything possible.

On the other hand, they said the administration told them that since they had Emergency Medical Services (EMS) personnel in the hospital, they would assist the nursing staff by screening patients at the gate.

“However, we are still waiting for the holding area, where we will keep suspected coronavirus patients before they can be tested,” they said.
The medical practitioners said they would not go to any ward until their demands were met because in some patients the symptoms took a while to manifest.

On that note, they said it would be dangerous for them to go to the wards without the protective gear as they did not know what they would be dealing with.
Efforts of getting a comment from the hospital’s management proved futile as they were constantly reported to be in a meeting.